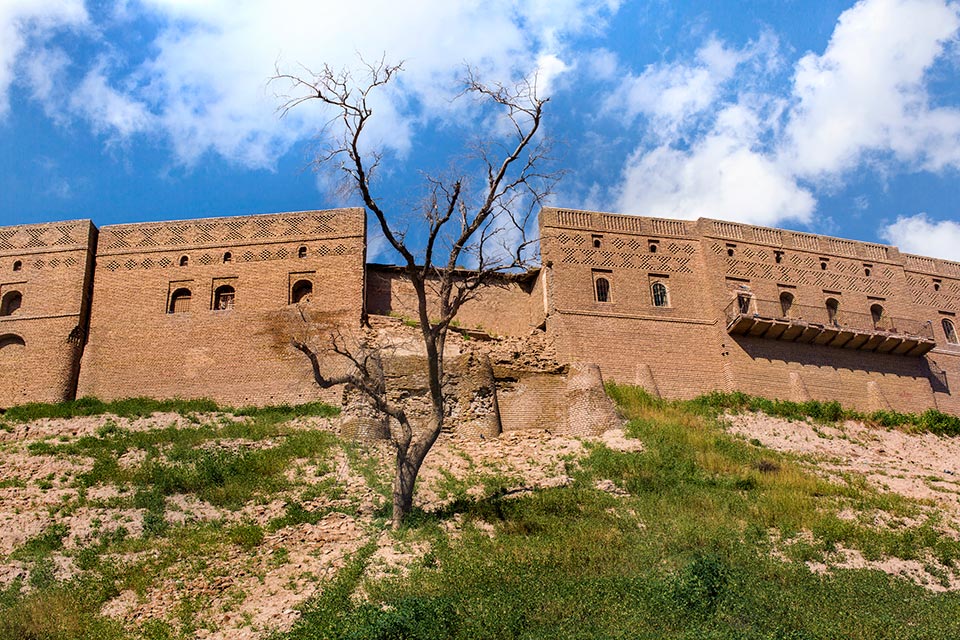 The perimeter walls of Erbil citadel viewed from below the ‘tell’.

During May 2016, Richard Wilding mounted exhibitions of his photography in the cities of Erbil and Sulaymaniyah in the Kurdistan region of Iraq. Alongside his contemporary colour photographs of Kurdistan and Northern Iraq, Richard also included black and white photographs taken by Anthony Kersting in the 1940s. These were reproduced from Kersting’s original prints and negatives held in the Courtauld Institute of Art’s Conway library.

Richard is a London based producer and photographer working internationally with museums, charities and governments on exhibitions, websites and printed publications. He specialises in the documentation of archaeology, heritage and cultural identity and is engaged in long-term projects in Kurdistan, Iraq and Saudi Arabia, in addition to ongoing consultancy work in the UK. 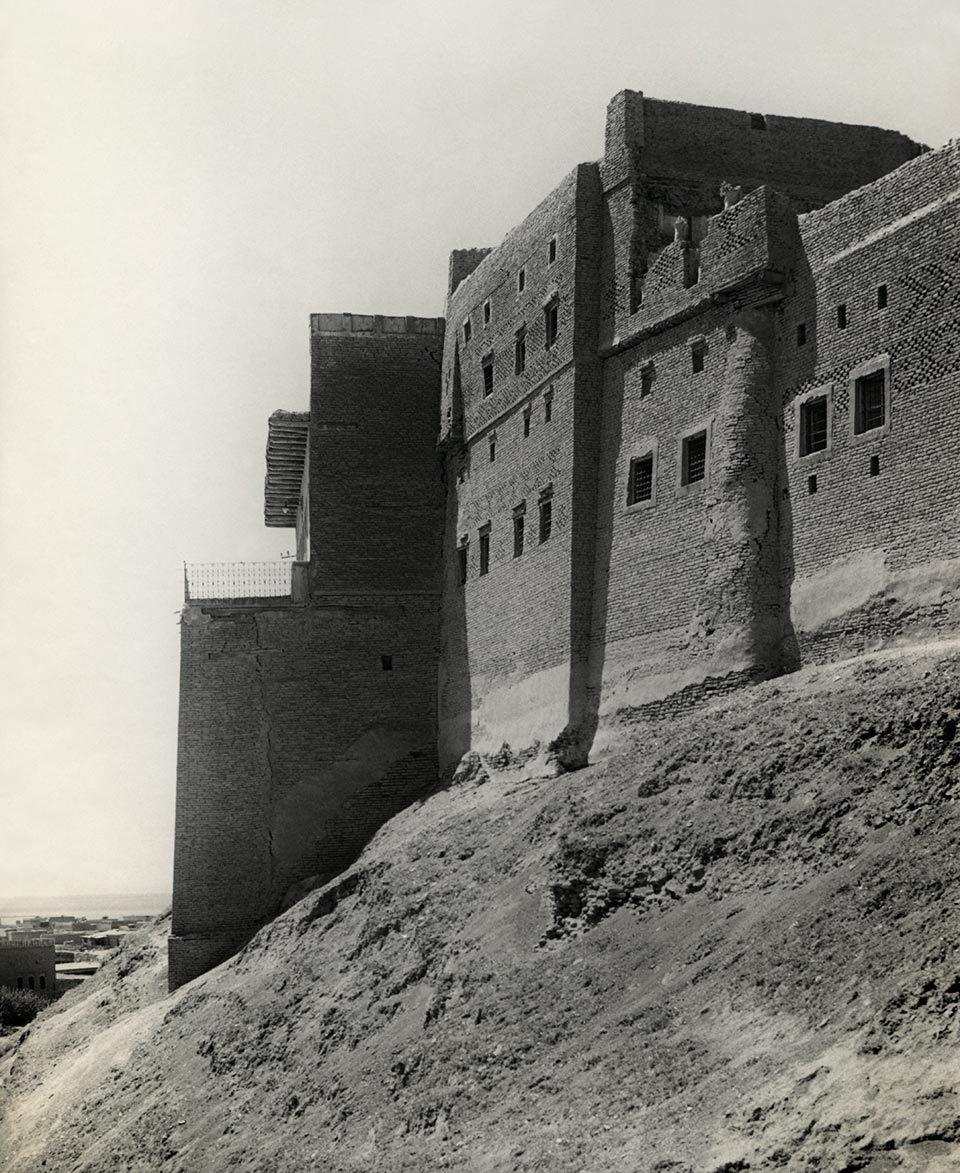 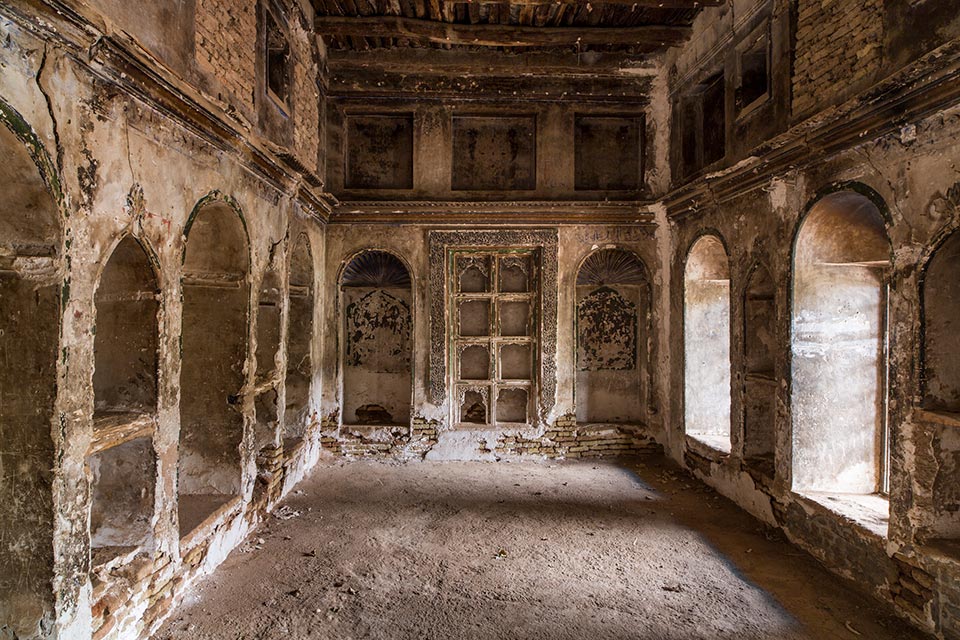 The late-Ottoman house of Muhammed Karim Agha Asaadi in the Erbil citadel. Restoration work has been interrupted by the ongoing economic crisis in the Kurdistan region of Iraq. 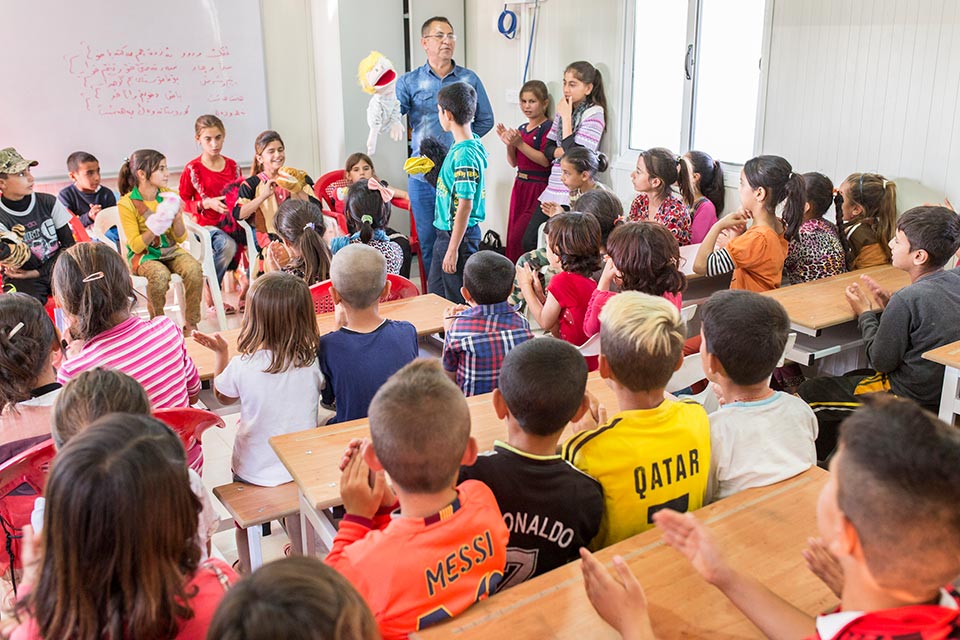 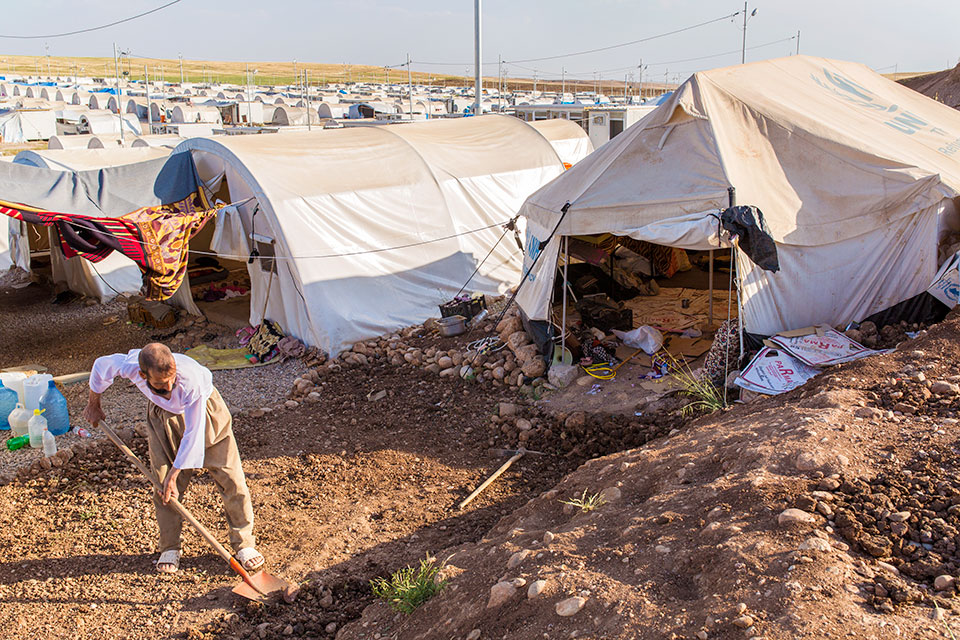 Could you tell us something about the background to your recent exhibitions in the Kurdistan region of Iraq?

Over the past few years I have travelled extensively through Iraqi Kurdistan with Gulan, photographing the region’s ancient civilization, ethnic diversity, history of persecution and renewal, and the current refugee crisis.

I had originally planned with Gulan to undertake an exhibition in Kurdistan two years ago, but this was interrupted by the emergence of DAESH (known in the West as ISIS). The region has since faced the combined challenges of defending a 1,000 kilometre border with DAESH, hosting two million refugees and IDPs who have sought refuge from the nearby conflict and an economic crisis caused by the collapse in global oil price and budgetary disputes with Baghdad.

When we considered bringing this new exhibition to Kurdistan in 2016 we did discuss whether it was the right time to be undertaking such a project, while the Kurdish people are facing such challenges. But we felt that it was more important than ever to celebrate the history and culture of the Kurdistan region, the warmth and resilience of its people, its respect and support for ethnic and religious minorities.

The exhibition did however reflect the events of the past two years, with Kersting’s photographs of the archaeology and architecture in and around Mosul that has recently been damaged or destroyed. I also included my photographs of the refugee camps, housing displaced residents of Mosul and the Nineveh plains. 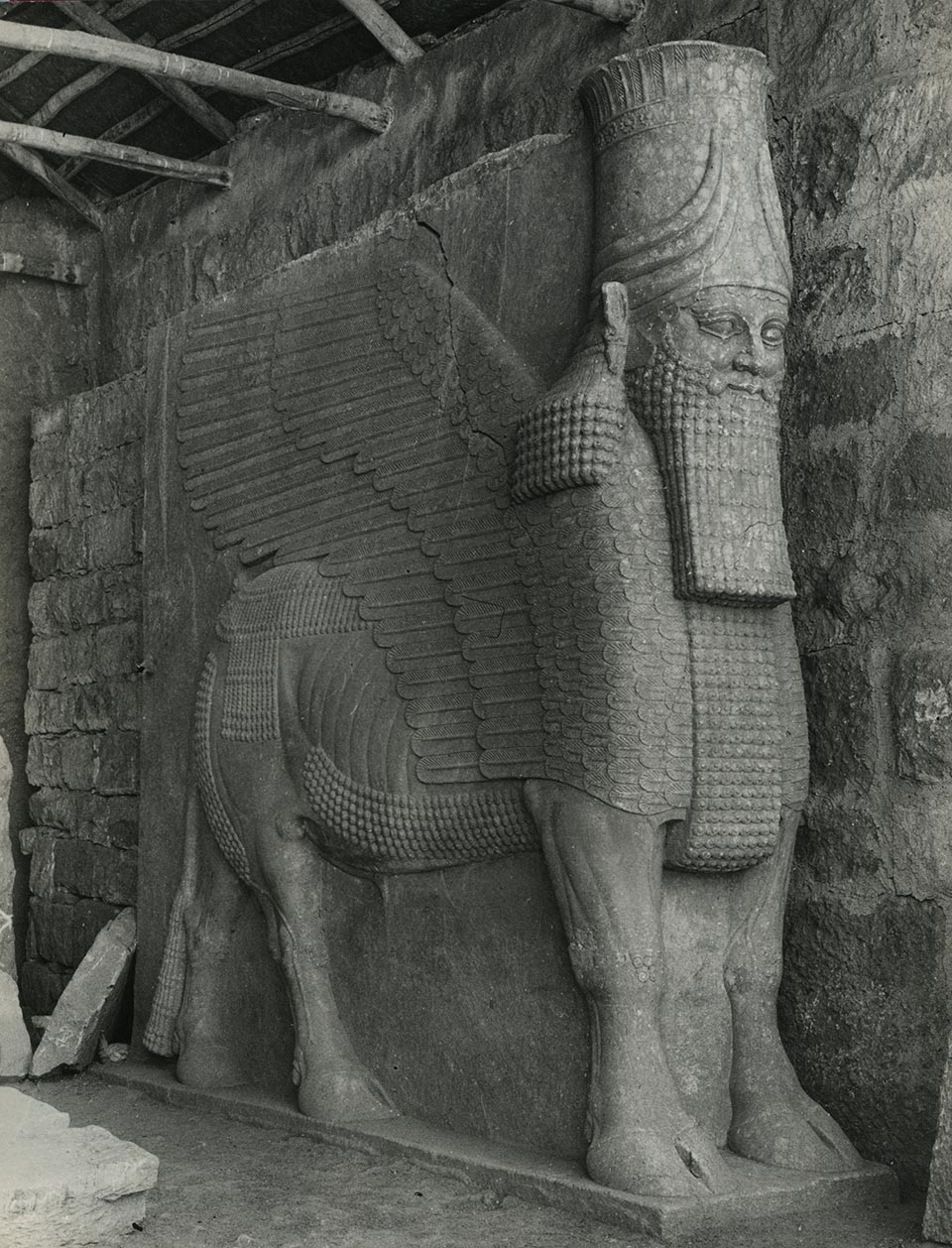 One of the two winged bulls or lamassu in the Nergal Gate, Nineveh, installed during Sennacherib’s expansion of Nineveh between 704 and 690 BC. Originally uncovered by Sir Austen Henry Layard in 1849 but reburied, they were exposed again by heavy rain in 1941. These were some of the few lamassu which remained in the location where they were originally discovered.

Video footage of the lamassu’s destruction was released in June 2016.

What do you know about Anthony Kersting’s life and work?

Kersting was born in London in 1916, the son of a banker. After leaving school he worked for two years at Lloyds Bank before deciding to make a career out of photography in 1936.

In 1939 he volunteered for the RAF, and in 1941 was posted to the photographic unit in Egypt. He exploited his time in the Middle East to the full, using his leave to travel widely and take photographs. Those he took in Iraq in particular are now of immense historical value. It is not clear whether the photographs he took on his travels through Jordan, Syria, Iraq and Iran were undertaken in an official capacity or whether these were purely personal pursuits.

After the war Kersting established himself as a leading architectural photographer. He provided many images for Nikolaus Pevsner’s ‘Buildings of England’ series and worked for Country Life and the National Trust.

When Kersting died aged 91 in 2008, he bequeathed his archive to the Courtauld Institute of Art in London. 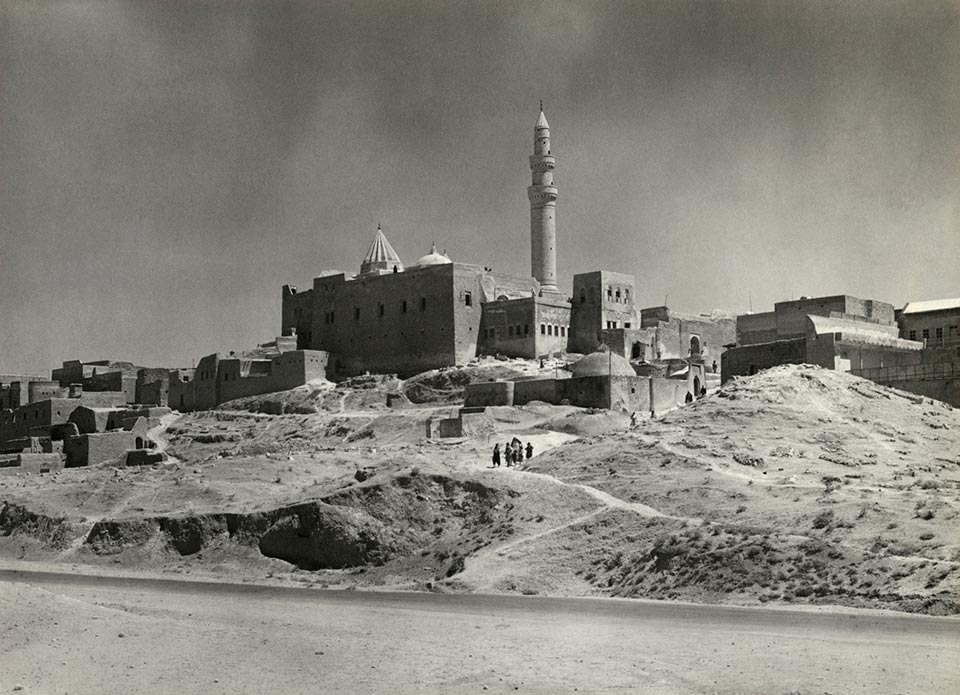 The mosque of Nebi Yunis (Jonah’s tomb), sitting atop one of the two mounds of ancient Nineveh. Nebi Yunis was destroyed in July 2014. 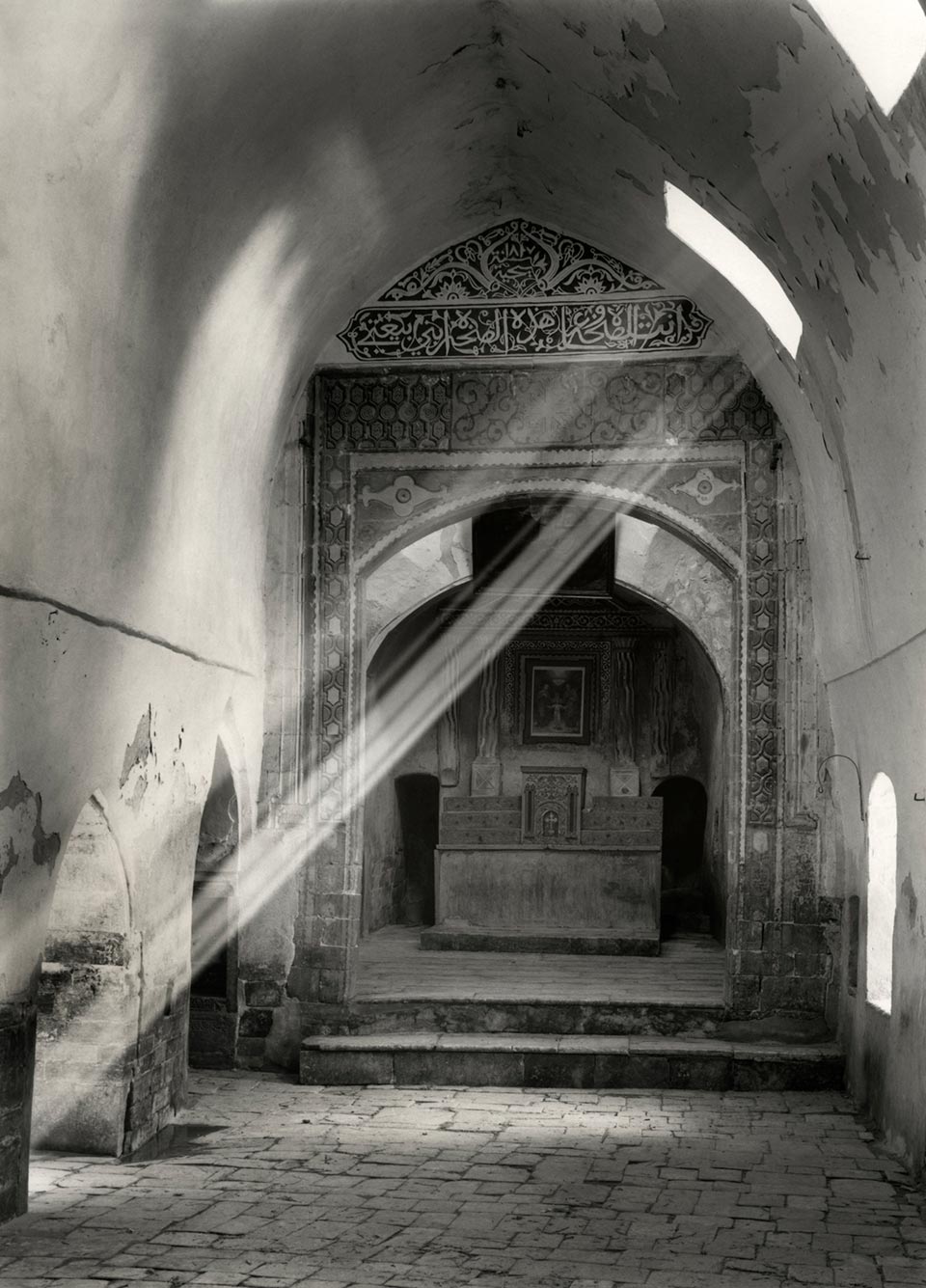 The church of St. Peter in Mosul. It is below the level of the ground, of the type referred to by Gertrude Bell as barn churches. 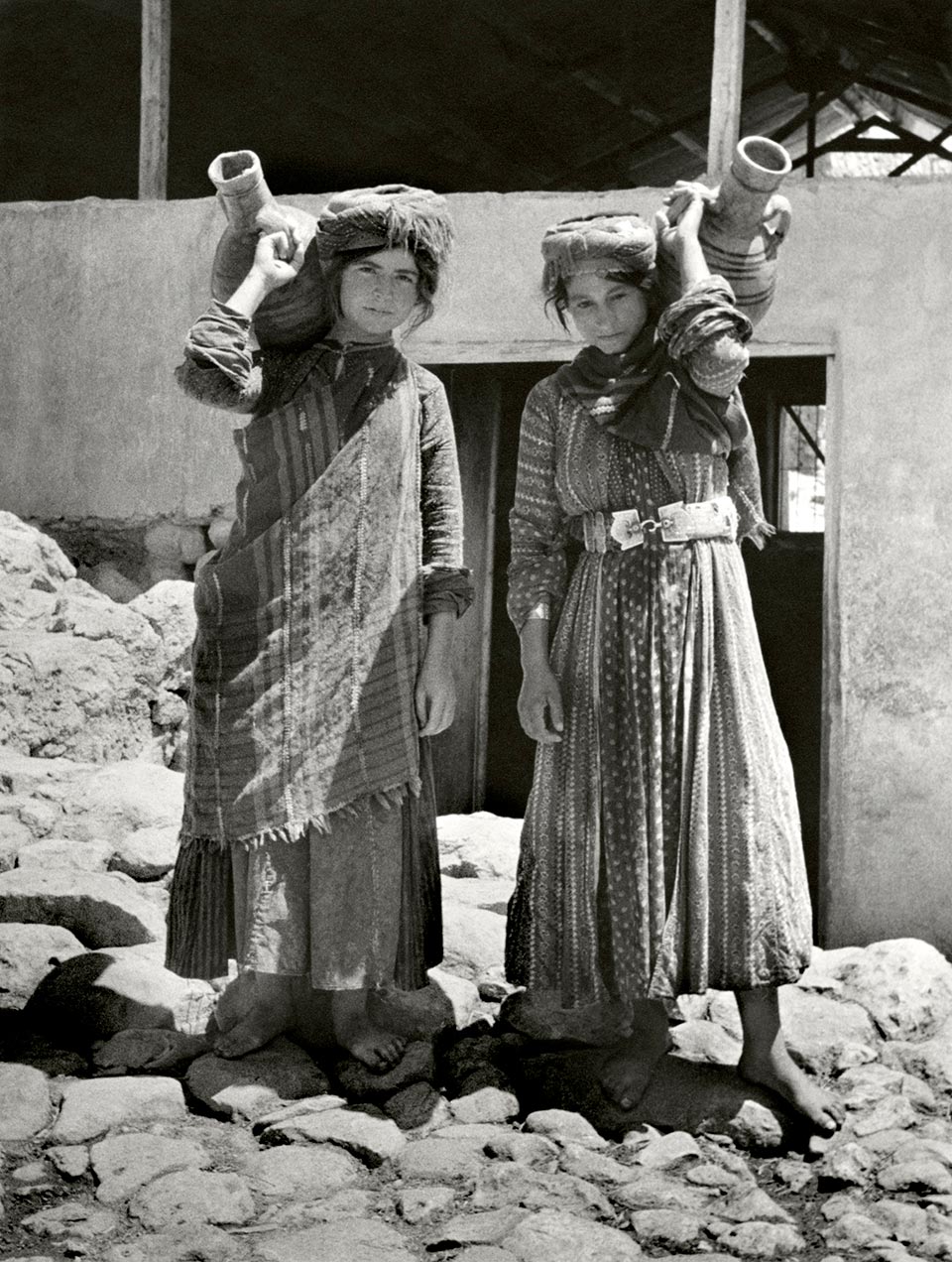 Two Christian Assyrian girls in the village of Tel Kayf, North of Mosul.

When did Kersting visit Iraq and what makes the photographs he took there different from those taken during the rest of his career?

Kersting first visited Iraq and the Kurdistan region in August 1944, travelling through Amadia and Dohuk, then Mosul and the surrounding towns and villages. He photographed the ruins of the Assyrian cities of Ashur and Khorsabad, the Seleucid / Parthian city of Hatra, then Erbil and its magnificent citadel, before continuing south to Kirkuk. Kersting returned briefly in October 1946, when he photographed the Yezidi shrines at Lalish near Mosul, the Assyrian canal at Khinnis, the monastery of Mar Banham and the church at Qaraqosh.
Kersting seems to have been enchanted by the places and people he encountered in Northern Iraq and Kurdistan. The photographs he took for most of his career were technically brilliant, but focussed on documenting architectural form and detail, with very few pictures of people or culture. In this region however he was clearly drawn to the diverse range of ethnicities, religions and customs and seemed to be interested in the people as much as the architecture. 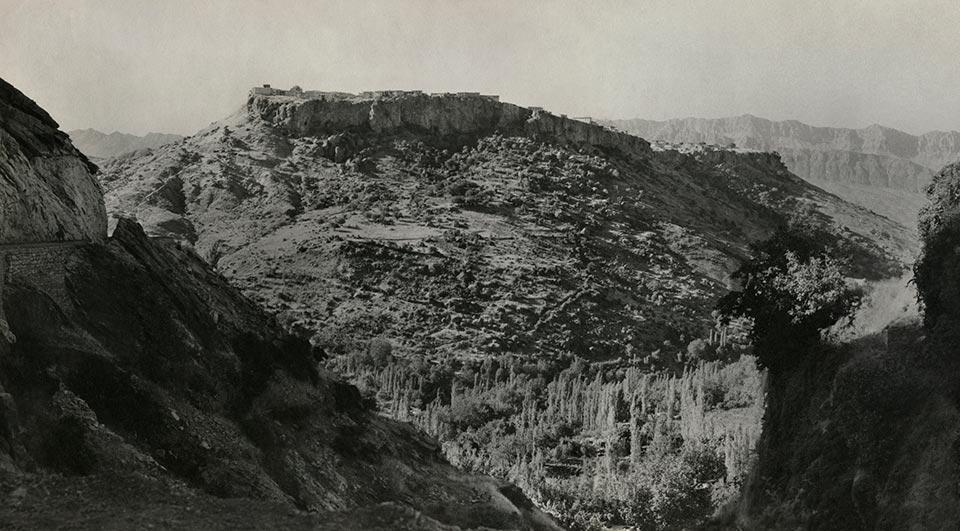 A panorama of the Kurdish town of Amadia, showing its magnificent defensive position,
standing on a mountain plateau precipitous on three sides. 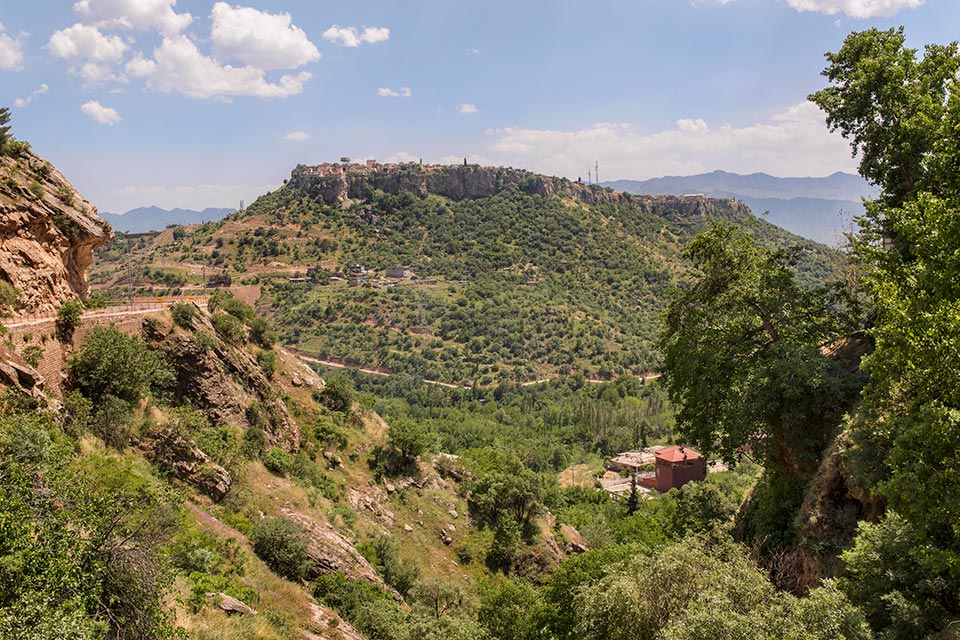 Have you visited many of the same locations that Kersting recorded in his photographs?

Yes, there are locations and subjects in the region that we have both been drawn to, and in fact sometimes I have discovered a location first through one of Kersting’s photographs, before travelling to the place myself. There are some photographs, such as one of Amadia, which form an almost identical view, separated by 70 years. I don’t set out deliberately to replicate the same subjects, but sometimes it just happens.

Kersting and I have both photographed the Erbil Citadel, which claims to be the oldest continuously inhabited city in the World. The citadel dates back at least 6,000 years and sits atop an archaeological ‘tell’ or mound of accumulated archaeological layers that rises 40 metres above the surrounding plain.

Kersting took many photographs of the Yezidis, a group that follows an ancient religion with many unique rituals and customs, which has been persecuted over the past few years by DAESH. I have photographed the Yezidi shrines at Lalish near Mosul including one particular doorway also photographed by Kersting.

We have both photographed the Assyrian canals built by King Sennacherib to take water to Ninevah, which archaeologists now believe was the location of the famed hanging gardens of Babylon. Kersting visited Khiniss, where the starting point of one of these canals is marked by reliefs of Assyrian kings carved into the rock. I also recently travelled further down this canal towards Nineveh (now Mosul) to Jerwan where the canal was carried over a valley by an aqueduct. The massive limestone blocks, covered by cuneiform inscriptions celebrating Senecherib’s great engineering achievement, still demonstrate this almost 3,000 years later.

Return to Kurdistan, Courtauld Institute of Art
Scroll to top